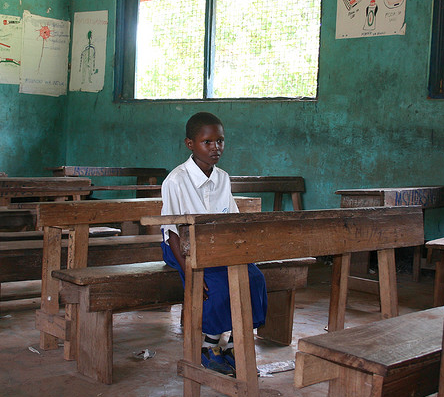 I was fortunate to serve with Lieutenant (Navy) Janan Sutherland. Janan is in his late 20s, originally from Windsor, Ontario and currently employed as an instructor at the Canadian Forces recruit school in St. Jean, Quebec. He is a reason you should be proud of the Canadian

Forces, and he is partly responsible for why its members rise to the top of every mission they are on. Quiet, super-competent, honest, humble and a natural leader, Janan was good company, especially so because he saw in me an older, sage-like personality and therefore gave me more respect than I deserved. I milked it for all it was worth.

We often made patrols to outlying villages, well off road and far away from our team site. The purpose was usually to do security assessments to see if the villages were having problems with banditry, roving soldiers, nomads stealing cattle and so forth. This day we ended up in Kortala, the home village of one of our interpret ers. Although set in beautiful countryside, Kortala itself is fairly barren, with straw huts, dilapidated shops, some rough stone buildings, wandering animals, no electricity and several broken hand-powered water pumps. In other words, it’s a normal Sudanese village of several hundred, perhaps a thousand, people of the Nuba tribe who are dependent on the crops that surround it.

Lt. Sutherland and one of our language assistants, Alnoor Haloof, had become friends over the duration of our tour. Alnoor is a bright, educated and articulate man and a local historian, whom our team could not do without. Upon arrival in his home of Kortala, Alnoor took Janan on a walkabout and apparently one of their destinations was the girls’ school. You should immediately rid your mind of the picture of a Canadian school. Think instead of three classrooms for 200 girls. One is under a large tree, the second in a straw tukol and the third is in a one-room building of rough stone, all within a spear’s throw of each other. And know as well, that no government representative, NG O or UN organization has visited the village in 60 years to help with their educational needs. This young Canadian officer does what every Canadian military member does while on deployment. He asks what he can do to help.

“I’m not a doctor or teacher,” he says to Alnoor, “but there must be something I can do.”

“School supplies are desperately needed,” replies Alnoor.  And so it began.

It began as a request from Janan to his family back in Canada for help to purchase school supplies for the Kortala girls school. Then it started to grow – and grow.

The Canadians raised more than $10,000 and, a few weeks later, Janan realized that his project has gone beyond the school supplies level. The word had spread back home and the money kept coming in.  Everybody knows the good man that Janan is and that was reason enough to donate.

Again he asked the question of Alnoor,“What should I do?”

While maintaining his job as a military observer, and doing it better than most, young Lt. Sutherland oversaw the construction of two classrooms and an office to be built onto the existing one-room stone school house in faraway Kortala, a four-hour-plus off-road drive in an SUV. If  he needed information, or needed to pass some information on, he’d make a cellular call to a neighbouring village and a relative of Alnoor’s would drive the message to phoneless Kortala. Lt. Sunderland’s team consulted school elders, drew up plans, hired an itinerant stone mason, ordered supplies and planned celebrations.

There were at least three major obstacles. It was at this point summer and Janan was deploying back to Canada at the end of October. Managing a project from a distance was difficult. And, most importantly, harvest season is about to begin. That meant all the men folk, tractors and wagons would be out in the fields to reap sorghum. Still, the villagers realized that the education of their young women is of paramount importance and were determined to find a way around the issue.

In the villages and farm areas of the Sudan, tractors are of immense value and importance. Families will share them and also use them as their ‘go-to-village’ vehicle, as having both a car and a tractor is unheard of. It was quite common to see whole families riding on a tractor, all laughing and falling about and struggling to hold on as father veered the vehicle around the huge potholes of the non-roads. These important tractors and their wagons would be needed to make the two-day drive down to Dilling to pick up the special construction supplies not available near Kortala.

The issue then became how not to disrupt the harvest work. In this country, no harvest meant no food for the village. Ultimately, a few of the men, with two tractors and wagons, made the long trek to Dilling in the fall. Tie rod, angle iron, and lumber were all loaded. Janan paid the owner of the hardware business and the Kortala men headed for a well-deserved cup of chi. They would make the long and rough drive back the next day. The supplies would then be unloaded, the tractors and men would go back to the fields and the stone mason and his mates would begin their work.

Towards the end of our deployment, we made a final patrol to Kortala. We had some idea that a celebration was planned for Janan, who was already blushing with shyness despite being several hours away yet from the village. He really wanted all this to be low-key, especially because he felt his own contribution to the project was relatively minor. (In addition to managing the project and raising the funds, Janan also donated a large sum himself.) We had two vehicles packed with military observers and Alnoor and his family and they bounced heavily as we navigated the rough countryside. Several hours of off-roading and we arrived at Kortala. The village was turned out for us, less the workers in the fields, for which they apologized. (“The celebrations are not as big as we would like for you, but you see . . . .”)

A wonderful lunch. (They watched us eat.) Music. (Instruments made from animal tusks and horns.) Dancing. (Lots and lots of wonderful Nuba Mountain tribal dancing.) There were presentations of bowls made from gourds, hand-woven mats and decorated ostrich eggs.

Inspections of the half-built school (with everyone trailing Janan and listening as he made appropriate comments), speeches from the elders, beautiful singing from giggling school girls, exchanges of items and return thank-you speeches rounded out the day. It concluded with more dancing, this time including the guests. During the ceremonies, Janan made a fine speech and presented a plaque with the names of his family and all the donors on it. It will be mounted above the school’s front door.

As the sun set, the day wound down – and we had several hours driving back to Dilling ahead of us. Alnoor is considered a hero for bringing this wonderful gift to the village.  And young Janan? Well, the villagers think he was sent by God or Allah. Truly. How else to explain the arrival of this young Canadian and his subsequent good works? Regardless, every villager now knows lots about Canada and thinks every Canadian is like Janan Sutherland. Best of all, the young girls of Kortala won’t have to sit under the village tree for classes when their new school is completed.

Jasmin And Bullet Holes
In Canada… Looking Back